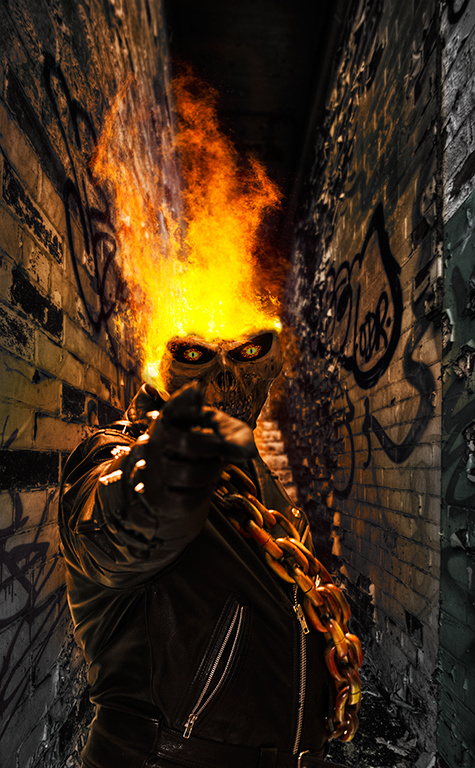 First a little history - Ghost Rider, a 2007 film staring Nicolas Cage. The film itself was based on a Marvel Comics character who first appeared in 1972.

The aim of this blog is to show the steps I went through in the creation of the final image.

It started from when I went along to Preston ComicCon 2014 with the aim of getting some images of the interesting people who were attending the event. It has to be said there were some interesting outfits, one of which was this character - 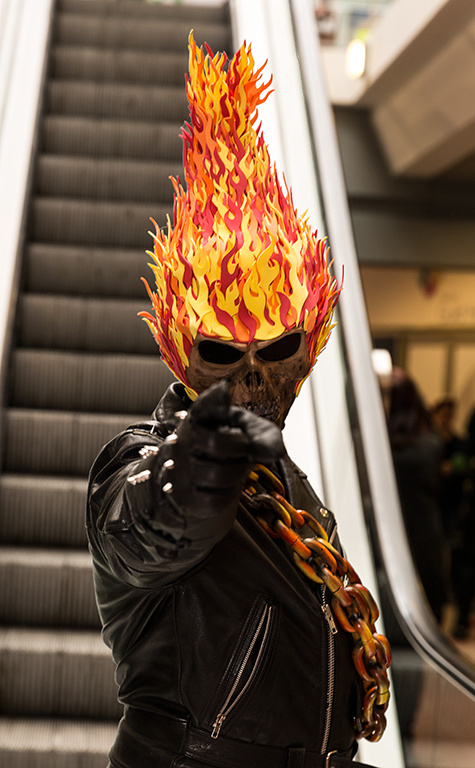 As interesting as his costume was, I though we could add a little extra spice to the end image. Maybe add some real fire, a fitting background and develop mood more in keeping with the character. 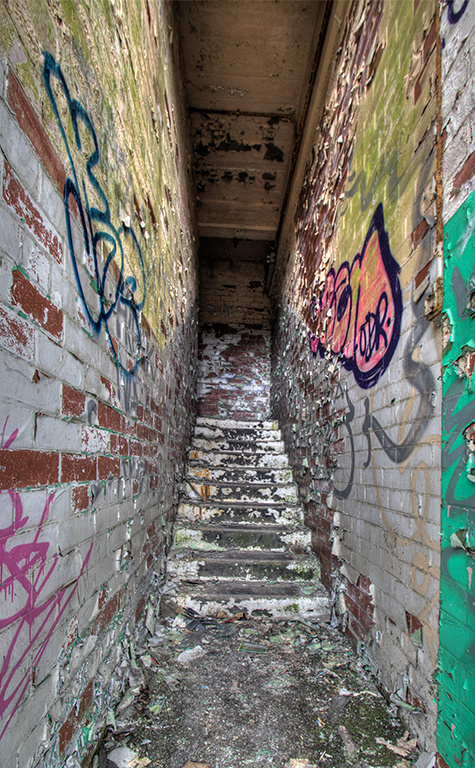 This is the original background, it is an HDR image of a stairwell in Huncoat Power Station which, as you many have guessed, is now unused. It has now become a home for Street and Graffiti Artists, not to mention a few lost photographers and their models.

The colour was too vivid and a little on the bright bright side for the mood I was after.  Using Adobe Photoshop I made a few little enhancements to grunge it up a little more. Firstly by using a curves adjustment layer to darkened the image, then a Hue/ Saturation adjustment layer to remove some of the vividness. But this wasn't enough for me so onto that I added a Black and White adjustment layer to completely remove any colour. Some of this colour is then brought back by reducing the opacity on the B&W layer. This resulted in - 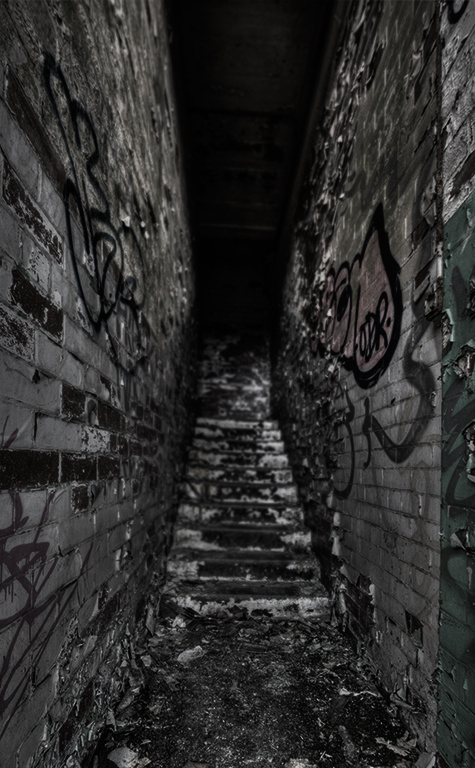 Next step, add add the rider. 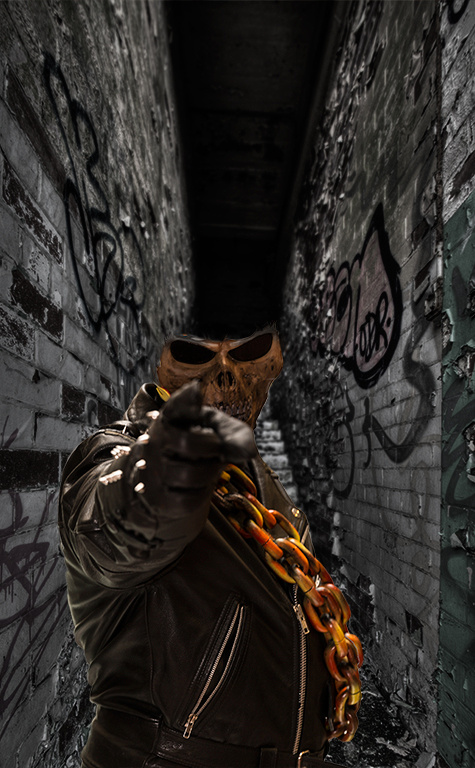 As you can see from the image above I have removed the background and "fire" from the original photo. This was done by selecting the character and creating a layer mask. This method allows for the background to be removed in a non-destructive manner, the advantage of this allows for fine tuning at a later stage should it be needed.

Now Ghost Rider was bathed in fire, so to make this image sing I really needed fire. To do this this I used 3 images from a bonfire night I attended in Wales a few years back.  I always wondered what I would do with these and now I know. 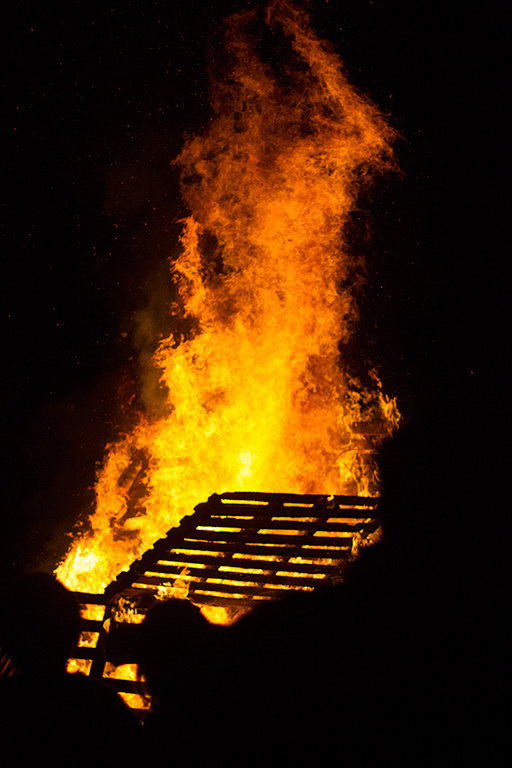 Using  the Screen Blend Mode on the layer means that anything black becomes invisible resulting in only the fire being visible. Combining this with a layer mask and I just show just the parts of the fire needed.  Then with the use of a little warping using Puppet Warp transformation tool,  I moved the flames around for the look I wanted to give the flaming skull. 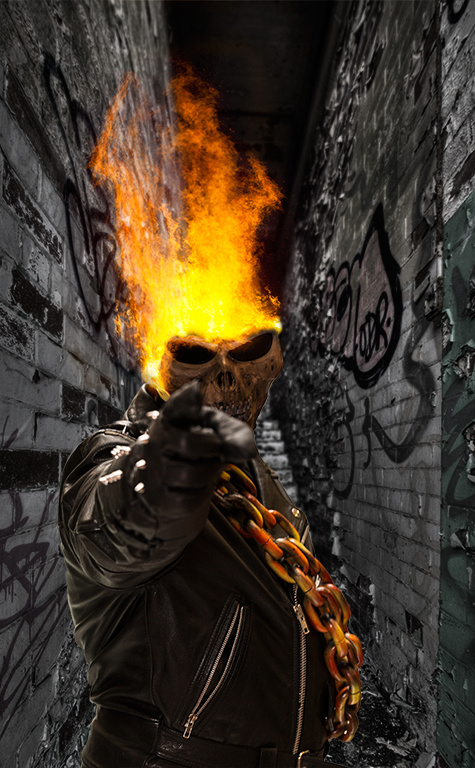 But a few more extra features were required to make the image work. These  included the addition of a warm glow and eyes to produce the final image.